It's time once again for NH Harvest - A Fine Arts and Crafts Open Studio Event. Every second weekend in October, which for New Englanders falls conveniently on the Columbus Holiday weekend, I open my studio to visitors.

For two days, I share my space with other artists, and we share the 'stage' demonstrating our skills in woodturning, carving, fine stoneware pottery and watercolor and pen and ink drawings.

If you live in the New England area, take a drive into New Hampshire, and stop by my barn. We'll be here from 10 am to 4 pm, Saturday and Sunday. And if you like what you see, we'll have several pieces for sale.

Below are some photos of recent work, maple hollow forms, painted with black gesso, and then chip carved through to reveal the contrasting wood. This is a test piece, practicing random carving patterns. You'll see this, and much more this weekend. 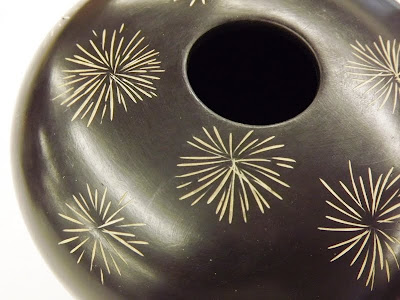 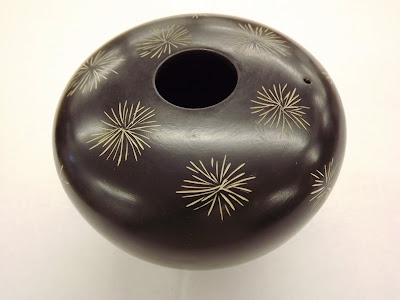 Posted by donnaturns at 6:57 PM No comments:

Could You Polish My Piston????

That was the unusual request that I received, first by email and then to my studio phone.

Now before you jump to any naughty conclusions, let me explain. Eugene Henson, of JE Pistons, Huntington Beach, California, (http://www.jepistons.com/) had a wood piston that he and his crew made as a gift to present to their boss, who had been promoted and would be moving to Texas. They bought a piece of wood from Australia, and created a piston using the same CNC machines that cut the aluminum ones that are used in high performance race cars. The choice of wood - I’m guessing Sheoak, or Lacewood, but if any of my Aussie woodturning buddies can help me out, please do - was intentional, said Eugene, because they made pistons for an Australian race team.

“I guess we didn’t really think this through, because after we cut the piece, we wondered how we could put a finish on it, to make it really shine”, said Eugene. “I came across your work on Youtube and your website, and thought maybe you could help us out.”

Working on about a 10-day window, I received the piston that Eugene had shipped overnight, and began working on cleaning up some of the sharp edges. The CNC machine did a fine job of cutting the wood very cleanly, almost too clean, because the edges were sharp enough to cut you. I had originally planned to clean them up with a diamond stone held in a rotary tool, but most of the interior angles were too steep. I resorted to a good-old-fashioned hand tool, a fine tooth Auriou rasp. 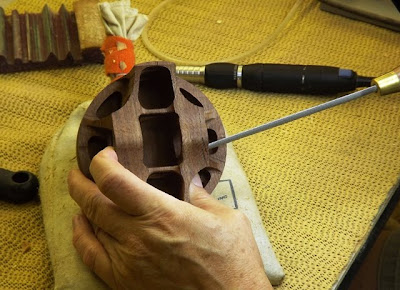 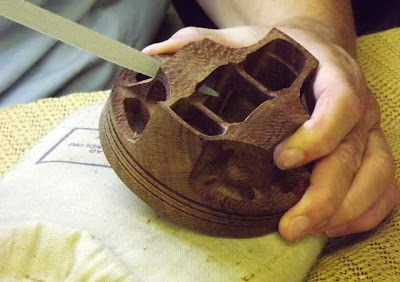 Several coats of hand-rubbed tung oil every 24 hours, followed by an application of microcrystalline wax, and the piston was back on its way to California. Because of the time deadlines, I didn’t have time to set up my back-drop and photo lights; I had to photograph the finished piston using natural (outdoor) light on my deck.

I have the coolest job in the world...except maybe for Eugene and his crew!! 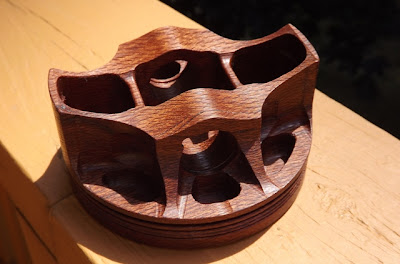 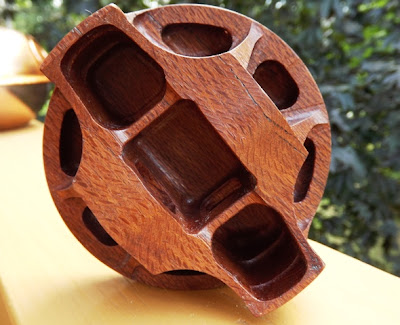 Posted by donnaturns at 3:12 PM No comments:

Stairway to My Heaven

While I was in St. Paul Minnesota last weekend attending the 25th Annual Symposium of the American Association of Woodturners (AAW), the stairway was built to the second floor of my barn. 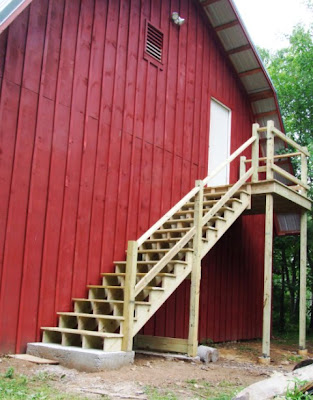 Even though I moved into the building in May, 2009, it wasn't completely finished; the barn is still a work in progress. But with the help of fellow woodturner and ART member, Mike Green, over Saturday and Sunday, Dave and Mike got THIS project done. And while they were building the stairs, Mike's wife, Sharon kept them well fed, and was the perfect surrogate Mom to my dogs, Eddie and Max.

The deck at the top is 6 ft. by 6 ft. The two side rails are temporary and will be replaced by three drop-in rails, that can be easily removed for hauling oversized pieces straight up and through the doorway.


The entire second floor is for wood storage, and all the noisy equipment. With the exception of the air compressor and sand blasting booth, everything currently up here was carried up a 12 ft. ladder that was leaning against the bottom of the doorway. The small bowls and billetts were carried in an old rucksack over my shoulder. Larger pieces and stickered boards were lifted up by me, to my husband, who pulled them in the rest of the way. 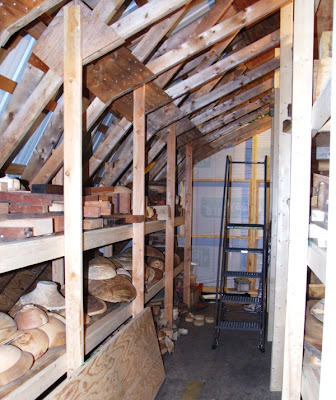 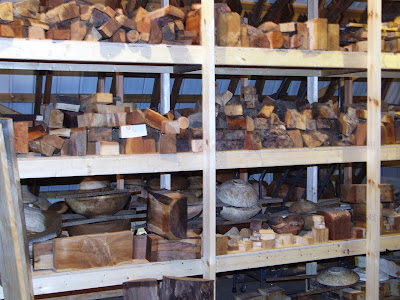 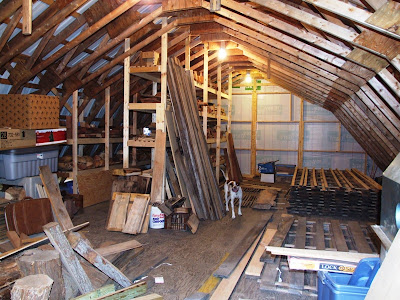 That's Eddie, an English Pointer and one of my shop mates, in the middle of this photo.

Having the stairs will make it soooo much easier to store my blanks and billetts. Looks like Dave will need to build more shelving space very soon! 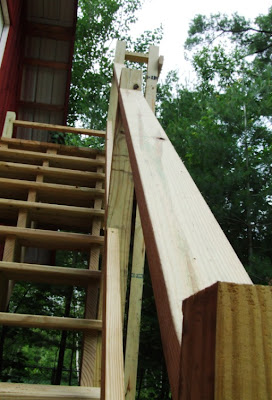 See all these posts that are flat on top? That's for my contribution. I need to turn finial caps for each of these posts. Hey, I can do that! I'm a woodturner!
Posted by donnaturns at 4:52 AM No comments:

While the past Memorial Day Weekend was a time for family and fun, the 'Official' start of summer, I spent some of that weekend working in the studio. A woman contacted me about turning a replacement leg for a maple table that had been in her family for about 30-40 years. 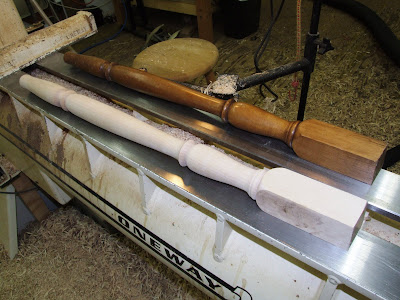 As most of you know, I'm primarily a bowl turner. But I do enjoy a challenge, so took on this job as just one more turning. After calculating the materials costs and labor, I came up with a quote. The customer had no problem with that (hmmm... maybe I underquoted?) 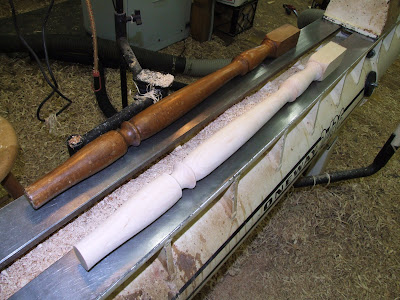 Here's the finished table leg, ready for stain. And yes, I underquoted my labor. Lesson learned for next time. 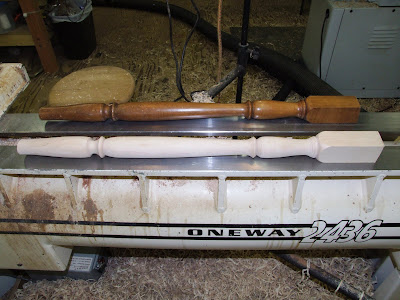 I'm hosting Alan Carter in my studio this weekend (May 21/22) for a demonstration and workshop. Alan's background in furniture making shows in his well-known body of current work - suspended vessels.

Alan's work can be seen here, at his recently updated website:

Here's hoping that he won't need an Ark to get from the Manchester airport to my barn on Friday afternoon. :-)
Posted by donnaturns at 3:48 AM No comments: