The finished Lilac Leaf.  This was a commission for Norman Stevens.  I presented this to him last night (Friday, June 29, 2018) at the opening of the Exhibition, Celebrating 85, The Stevens Collection.  All hand-carved and painted, I worked exclusively on this piece for two weeks, so that it would be finished in time to present to him in person.  He loved it! 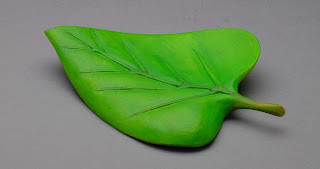 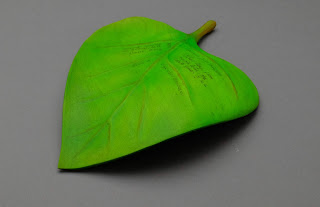 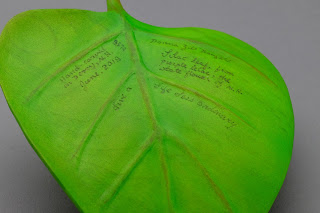 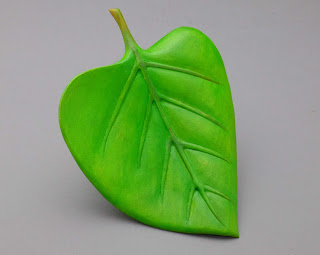 Posted by donnaturns at 6:54 AM No comments:

There have been several more days of carving, focusing on the details - making it thinner, adding veins on the front and back, the Lilac Leaf is now ready for color.  That happens tomorrow. 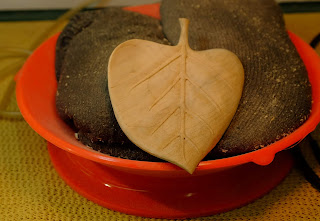 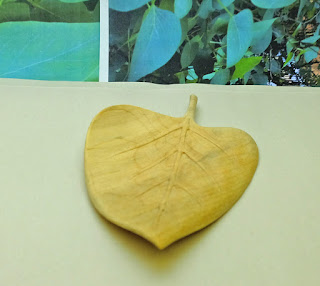 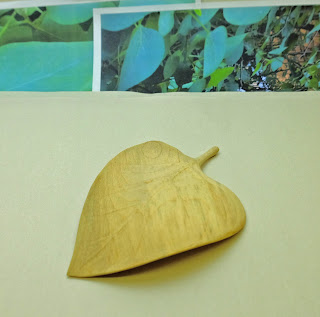 Posted by donnaturns at 6:46 PM No comments:


A new commission, carving a Lilac leaf.  I’ve carved plenty of spoons and ladles, but a single leaf was a new one.


I started this project by taking photos of leaves on my iPad, to use as reference.  I have a very large lilac bush in my front yard, so I didn’t need to travel far.  Next step – select the wood.  I had to use a piece that was fairly thick, because I wanted the leaf to have curl and movement.  I opted to use a roughed out bowl blank, and cut the leaf from a side wall. 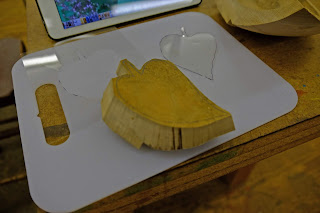 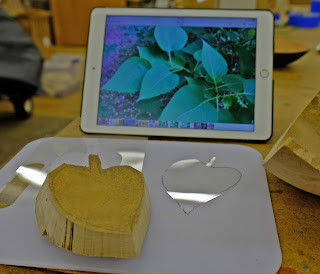 Using a sheet of Acetate, I sketched a pattern, then cut it out and placed the clear pattern on the bowl.  Being able to see through the pattern was important for grain orientation.  The leaf stem would be very narrow and thin, and I needed to be sure that the grain orientation ran the length of the stem, rather than across.  Then using the bandsaw, I cut the leaf out of the bowl.


Several days of carving and I’ve got the leaf roughed out. Now to work on the finer shaping. 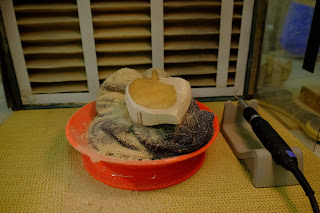 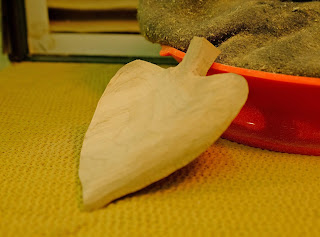 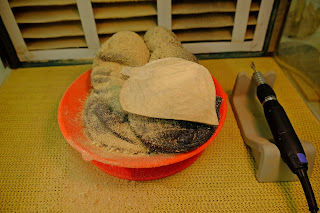 Headed to NY tomorrow for Totally Turning, part of the Northeast Woodworkers Association Show in Saratoga Springs.  Join me on Saturday and Sunday, and I'll show you how I create these Illusions in Wood. 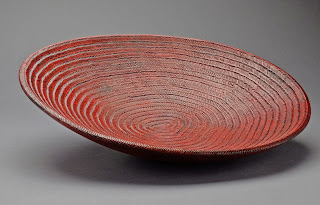 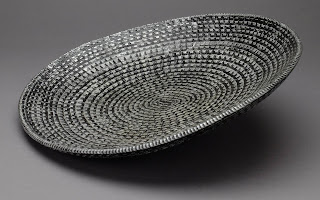 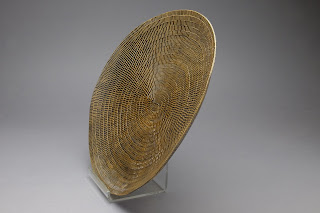 Posted by donnaturns at 5:29 PM No comments:

Long time gone...since I last posted.  I've been busy, and here's the proof. 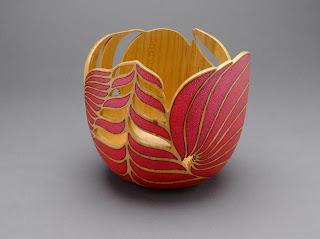 A few years ago I started a body of work, "It Satisfied My Soul."  Pictured above is number 5 in the series, (nicknamed Soul Series).  This piece was recently juried into the Fuller Craft Museum's Biennial Members Exhibition.  The Exhibition opens April 14, 2018 and ends October 7, 2018.  The Artist's Reception is Sunday, May 20 from 2-5 p.m.  I'll be there and would love to meet you!
Posted by donnaturns at 7:14 PM No comments:

One way or another the World Series will be over by the weekend. What to do? How about taking part in a state-wide shopping and touring event? I, along with hundreds of other artists, craftspeople will join together this weekend and open our studios to YOU! Come visit me in my studio in Derry NH on Saturday, November 2 from 10:00 am to 4:00 pm and Sunday, November 3, from 12:00 pm to 4:00 pm. I will be woodturning on Saturday and carving on Sunday.

Have you ever wondered how a bowl is turned on a wood lathe? Drop by on Saturday; I have a cherry log delivery arriving this week, and it needs to be rough-turned into bowl blanks. On Sunday, I will be at my carving bench, working on one of a number of carving projects, using powered carving tools and pyrography equipment. Maybe even the one pictured above.
Posted by donnaturns at 11:26 AM No comments: 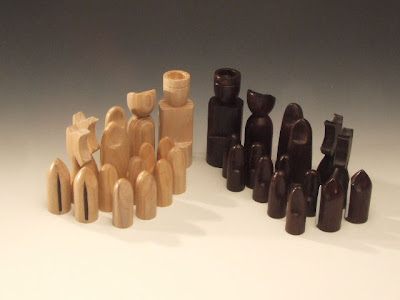 The story behind Kyle’s chess set…. It all began about eight years ago with Harry Potter, so it was fitting that the chess set I made had a connection to that story…. When Kyle was I think, about eleven years old, he spent a week with me in New Hampshire during the summer. I was trying to come up with ideas, things that a kid might enjoy doing. I had been woodturning for a couple years, and knew that Kyle was a huge fan of the Harry Potter series, so I thought it might be fun to make a Harry Potter Wizard wand together. So Kyle and I turned – well, I turned, and he sanded – his wand. As we worked on the wand, here’s how the conversation went: Kyle: “Have you ever turned a chess set?” Me: “No, why, do you play chess?” Kyle: “Yes” Me: “Who do you play with?” Kyle: “My Dad” Me: “Do you beat him?” Kyle: “No, not yet.” Me: “Well, when you beat your Dad, I’ll turn you a chess set.” I didn’t know how good Kyle was, because he started beating him soon after on a regular basis. So I was on the hook. I had never turned a chess set, and it would involve turning skills that I did not yet possess, and some skills I never would – math! Multiple turned pieces had to be identical, a skill I had yet to accomplish. And following a set of directions on how to turn a chess set involved math – a skill that has always escaped me. But a promise is a promise….. Fast forward a few years during which several commitments and obligations came and went. But I got better at woodturning and started carving, too. I told Kyle that I would deliver his chess set when we came to Michigan for his high school graduation. As the date came closer (less than a year away), I looked at plans for turning a chess set, but none grabbed me. Then Dave happened into a bookstore that carried a woodturning magazine from the United Kingdom that contained the first of a three-part series on how to turn a very unusual chess set. The set was created by a woodturning Scottsman, who based it on the walrus ivory carved chess pieces found in a cave on the Isle of Lewis. These medieval chess pieces, several different sizes and none a complete set, are believed to be the oldest chess pieces in existence, dating back to the 12th century. The best part of the story is that the Lewis chess pieces were the basis for Wizard’s Chess in the Harry Potter stories. I had found the right chess set! The woods that I chose were Ash, for the light color and Wenge (pronounced Wen-gay), for the dark. Ash is a domestic wood; Wenge is a timber native to Africa. I had checked with Kyle about a chess board – I don’t do flat woodworking – way too much math – and he had one of Dziadzia’s chess boards, so we were good there. Then Dave asked me how I was going to present this chess set. A plastic grocery bag from Meijer’s?? No, that wouldn’t do, so Dave agreed to make the box, using the same woods as the chess set. This was a first for both of us- I had never made a chess set, and Dave had never made a box. This was about as far out of our comfort zone as we could get. But when you leave your comfort zone, magic happens…. 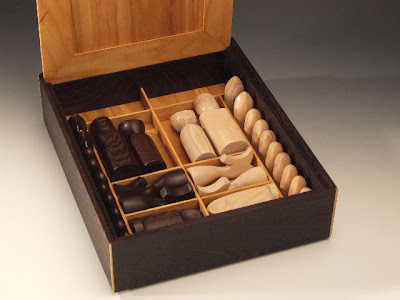