I attended my first national woodturning symposium of the American Association of Woodturners (AAW) last month, held in Hartford, CT. There I met wooden spoon collector, Norman Stevens, who had a small portion of his vast collection on display. Cheeky me, I introduced myself, sharing that, while I spend most of my time as a woodturner, I have discovered and appreciate the satisfaction of using simple hand tools to carve spoons.

We exchanged business cards, and about 10 days later, I received a request to carve him a spoon. I suggested the spoon be carved from the maple tree harvested at the Robert Frost Farm, in Derry, NH. This tree is said to be the inspiration for many of Frost's poems, including "Tree At My Window". I was there for the harvesting in 2007, documenting the entire day with photographs. Mr. Stevens was thrilled with the proposal, since he is originally from Nashua, NH. 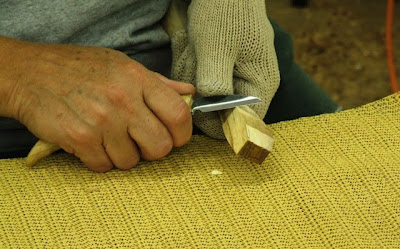 I started working on the Frost Maple spoon today. But before I touched that valuable wood, I first carved a prototype from a lilac branch, which appears in the upper left corner of the photo. I often make prototypes which help me work out design ideas, form and proportions. And for this project, I'm carving two identical spoons. There's simply too much riding on this commission to risk making a mistake, especially near the very end. 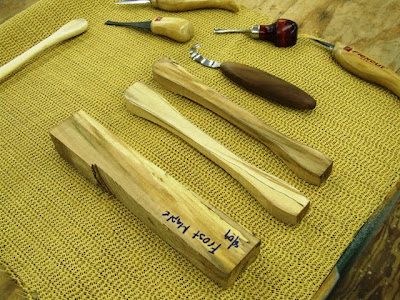 I'll document this project, too, and post my progress on this Blog. I think it's fitting, that the tool I'm using in the bottom photo, with the curved blade, was hand-made by Del Stubbs, a former woodturner. I'm using this tool to carve out the concave scoop portion. 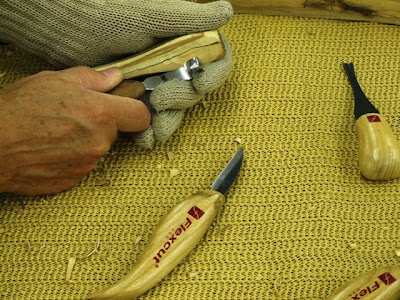 Posted by donnaturns at 3:16 PM No comments: